Welcome to our monthly newswire. We hope you find this newsletter useful. Please contact us if you would like to discuss any matters further.

The Government has responded to pressure from accountants and other interested parties and announced the delay of Making Tax Digital for Business to 2020 at the earliest.

Quarterly VAT reporting using the new system will be mandatory from 2019.

In a further U-turn, three million small businesses and buy to let landlords below the VAT threshold will now not be required to keep digital accounting records but will be able to move to the new system for keeping tax records at a pace that is right for them.  For such businesses, Making Tax Digital will be voluntary.

Mel Stride, the new Financial Secretary to the Treasury and Paymaster General, announced that the roll out for Making Tax Digital has been amended to ensure businesses have plenty of time to adapt to the changes.  Under the revised timetable:

As VAT already requires quarterly returns, no business will need to provide information to HMRC more regularly during this initial phase than they do now.

All businesses and landlords will have at least two years to adapt to the changes before being asked to keep digital records for other taxes. This deferral will give much more time for businesses, supported by their advisers, to identify for themselves, at their own pace, the benefits of digital record keeping. It will also ensure that many more software products can be developed and tested before the system is mandatory.

It has also been announced that the second Finance Bill will legislate for all policies that were included in the pre-election Finance Bill but had to be dropped in order to rush through the Finance Act 2017 before the snap general election in June.

The Government has re-confirmed that all policies originally announced to start from April 2017 will be effective from that date.

This new scheme is designed for working families, including the self-employed, in the UK. For every £8 you

pay in, the government will add an extra £2, up to £2,000 per child, or £4,000 per year for disabled children under 17 years old. The special account is then used to pay for childcare with an OFSTED registered nursery or childminder.

In addition, parents of 2-3 year olds, who will be eligible for a 30 hours free childcare place in September 2017, can apply through the childcare service and start arranging a place with their childcare provider.

WORKING IN THE “GIG” ECONOMY

The House of Commons Work and Pensions Committee has recently published a report calling on the Government to close the loopholes that allow “bogus” self-employment practices, which burden the welfare state but reduce the tax contributions needed to sustain it.

This follows the “Matthew Taylor” inquiry which took evidence during February and March 2017 from witnesses including representatives of companies such as Uber, Amazon, Hermes and Deliveroo. Most of the people working for such organisations were not on the payroll and have limited workers rights and are paid for each delivery or “gig”. The Committee recommended a default assumption of “worker” status, rather than “self-employed”, and said that the incoming Government should set out a roadmap for equalising the NICs paid by employees and the self-employed.

Mr Taylor was also asked to produce a report on the status of such workers and suggested that a new category of “dependent contractor” should be established, but the report did not conclude on how such a worker should be taxed.

A scheme using Employee Benefit Trusts (EBTs) as a means of remunerating directors and staff has been defeated by HMRC in a recent Supreme Court case.

Such schemes had been used by many employers to avoid PAYE and national insurance contributions (NICs) and involved complicated trust structures and “loans” to the employees. The Supreme Court judges have ruled that these loans were in substance employment earnings when payments were made to the trusts and are thus ineffective in avoiding PAYE and NICs.

The anti-avoidance rules have also been strengthened in the latest Finance Act with the intention of blocking the use of similar schemes including the transfer of the liabilities to the employee.

Many employers were awaiting this decision and must now decide whether or not to settle with HMRC for the outstanding tax due. If you have been involved in such schemes please contact us to discuss what action you now need to take.

THINKING OF WINDING UP YOUR COMPANY?

Up until 6 April last year, the distribution of cash to shareholders on the winding up of a trading company by a liquidator, was usually taxed as a capital gain, potentially taxed at just 10% with the benefit of entrepreneurs’ relief.

However, last year’s Finance Act introduced a targeted anti-avoidance rule that may tax such a distribution as a dividend at income tax rates up to 38.1% under certain circumstances.

H M Revenue and Customs have recently issued guidance in an attempt to clarify when the new anti-avoidance rule would apply.

Broadly the anti-avoidance is intended to catch situations where the old company is wound up and a similar business is carried on by a connected business. Note however, the distribution would only be taxed as a dividend at income tax rates if one of the main purposes of the transaction was to avoid tax. This is a complex area so please contact us to discuss your plans so you do not fall foul of the new anti-avoidance rule. 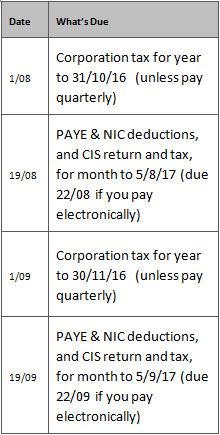