Welcome to our monthly newswire. We hope you find this newsletter useful. Please contact us if you would like to discuss any matters further.

The result of the General Election has left Teresa May and the Conservative Party clinging on to power with support from the Democratic Unionist Party (DUP) in Northern Ireland. This leads to a period of significant uncertainty for the country as the BREXIT negotiations are just about to start.

Following the General Election there have been important Cabinet reshuffles. Although Philip Hammond retained his position as Chancellor of the Exchequer, Jane Ellison MP the Chief Secretary to the Treasury lost her seat in Battersea.   Ms Ellison was day-to-day lead for Making Tax Digital, so it’s not clear if her demise might lead to another delay, while her replacement Liz Truss gets up to speed.  David Gauke has also moved from the Treasury to become Work and Pensions Secretary.

So what will happen to those measures in the original Finance Bill that did not make it into the first Finance Act 2017.

The planned changes to corporation tax such as the new losses rules were due to take effect from 1 April 2017.

The changes to deemed domicile were also due to start 6 April 2017. This has put tax planning on hold for companies and individuals affected by the changes.

WHAT IS THIS “DEMENTIA TAX”?

The Conservative Party Manifesto announcement and subsequent U-Turn on the requirement to pay for social care may have caused many voters to switch their allegiance in the June Election. Although this so-called “Dementia tax” is not strictly a tax, paying for social care has become more important than Inheritance Tax for many families.

If a local authority arranges for an individual to enter a care home on a permanent basis the individual will be means tested to see whether or not they should make a contribution towards the cost of their care. The individual may want to pass on savings or other capital to children or others during their lifetime, but it can affect eligibility for local authority assistance with care fees and Pension Credit.

Under current rules if an individual’s capital adds up to more than £23,250, the local authority may assess them as being able to meet the full cost of their care.

The Coalition Government published a White Paper on the reform of adult social care in July 2012. This proposed to implement the recommendations contained in the Commission on the Funding of Care and Support (known as the Dilnot Commission).  The Coalition Government proposed a cap on the maximum that an individual / family would be required to contribute. A figure of £76,000 was suggested to be introduced in 2016 but the Conservative Government elected in 2015 deferred this until 2020 at the earliest.

In their 2017 Election Manifesto the Conservative party announced that the £23,250 threshold would be raised to £100,000 and would also be the threshold for assessing whether the local authority would pick up the bill for Care in the Community. There was however no mention of any cap on Social care costs.  This resulted in a very rapid U-Turn following the launch of the manifesto. We are now told that there will be yet another Green Paper to consider a cap on care fees. This issue will need to be closely monitored as it will have a significant impact on any planning undertaken.

Inheritance tax planning such as transferring an asset out of your name does not necessarily mean that it will not be taken into account in a means test. Both the local authority and the Pension Service can, when assessing a resident’s eligibility for assistance, look for evidence of deliberate, or intentional, deprivation of capital such as a property transfer. Deliberate deprivation occurs when an individual transfers an asset out of his or her possession to put him or herself in a better position regarding the means test for care home accommodation.

This is a complex matter so please contact us to discuss the implications for you and your family’s assets.

ONE BUSINESS OR TWO FOR VAT?

A recent VAT Tribunal had to decide whether two hairdressing businesses should be treated as a single business for the purposes of VAT registration.

The distinction was critical as the two separate businesses were operating below the registration limit (currently £85,000) and the combined operation would have exceeded the limit meaning that VAT would need to be charged.

Note that HMRC have been successful in a number of cases aggregating the turnover of two businesses carried on by the same person(s).

However in this recent case it was established that the couple had never intended to run a single business in partnership. There was also physical separation of the premises, separate of clientele, different stylists worked for each salon and separate books were kept.

Note that where the same person carries on several businesses, the combined turnover of all of those businesses need to be considered in deciding whether or not the VAT registration threshold is exceeded.

In order for an expense to be deductible against business profits it must be incurred “wholly and exclusively” for the purposes of the trade.

In a recent tax case a hotel owner near Silverstone sponsored his grand-daughter’s career as a racing driver by making payments through his company. The argument was that this would promote the motorsport credentials of the hotel, rebranded as Silverstone Hotel. The granddaughter was well known in motor racing circles and her endorsement of the hotel was designed to promote the company’s business.

HMRC sought to disallow the expense on the grounds that there was a “duality of purpose” and consequently not incurred wholly and exclusively for the purposes of the hotel trade. However the Tax Tribunal allowed the company’s appeal and consequently the payment was tax deductible.

These are the suggested reimbursement rates for employees’ private mileage using their company car from 1 June 2017.

Where there has been a change the previous rate is shown in brackets. 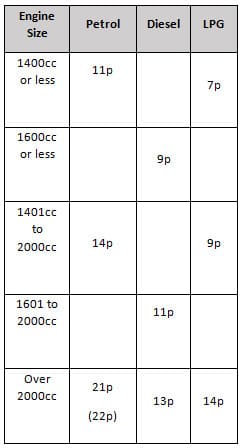