Welcome to our monthly newswire. We hope you enjoy reading this newsletter and find it useful. Please contact us if you would like to discuss any matters further.

U-TURN ON SELF-EMPLOYED NICs – FOR NOW

In his first Budget on 8th March, the new Chancellor Phillip Hammond announced that he would level the playing field between employees and the self-employed by increasing Class 4 National Insurance Contributions (NICs) from 9% to 10% from 6 April 2018 and then to 11% from 6 April 2019. His justification is that the self-employed are now entitled to more generous State Benefits than in the past, and thus NIC rate should be increased towards the 12% Class 1 NIC employee rate.

However, this was contrary to the Conservative Party manifesto pledge not to raise national insurance contributions during the life of the Parliament and the Government have bowed to political pressure and decided not to proceed with this proposal. Look out for a possible increase after the next election, which is now June 8th!

SHOULD WE GIVE SHARES TO CHILDREN AND PAY £5,000 DIVIDENDS TAX FREE?

The introduction of the £5,000 tax free dividend allowance has tempted many family company shareholders to give shares to other family members so that they can be paid £5,000 a year tax free. (Note that this allowance reduces to £2,000 from 6 April 2018).

Such a strategy needs to be carefully structured as there can be Capital Gains Tax on the gift of shares, and HMRC may also seek to tax the dividend as employment income under certain circumstances. The dividend will also be taxed on the parents if received by a child who is a minor.

If you are considering giving shares to other family members and then paying dividends, please come and talk to us first so that we can deal with this correctly.

Ever since the introduction of the 7.5% increase in the rate of tax on dividends in April 2016, it has been more tax efficient for owner managed business shareholders to pay interest on their loans to the company rather than pay themselves dividends.

The interest would be deductible against the company’s profits saving corporation tax at 19% (was 20%), whereas dividend payments are not tax deductible. A higher rate taxpayer would end up with more post tax cash, despite the rate being 40% compared to the 32.5% rate on dividends.

The table below assumes that the shareholder is a higher rate taxpayer and has already taken a dividend of £5,000 tax free. 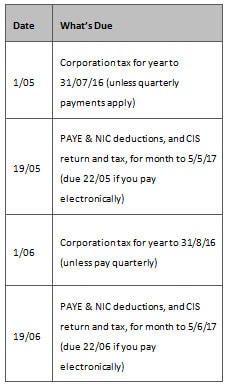 The above calculation also assumes that the shareholder has £500 of other interest so that the savings allowance has already been used. Note also that the company is currently required to deduct 20% tax at source and report the interest on form CT61.

DOES THE NEW 16.5% VAT FLAT RATE PERCENTAGE APPLY TO YOUR BUSINESS?

A “limited cost trader” is one using the VAT flat rate scheme but where the VAT inclusive cost of goods for a year is less than 2% of VAT inclusive turnover, excluding certain specified items.

If you are currently using the VAT flat rate scheme contact us to discuss whether the changes will apply to you.

For deaths on or after 6 April 2017 there is now an additional £100,000 inheritance tax (IHT) allowance where the family home is passed on to direct descendants. This was originally announced on 8 July 2015 and that date is relevant where the deceased has downsized to a lower value property.

Note however that the Labour Party have announced that if elected they will reverse this generous measure!

As mentioned in previous newsletters, it may be necessary to review your will and estate planning to ensure that you take full advantage of this new relief.

SELLING LAND TO A DEVELOPER – IS THAT TRADING OR A CAPITAL GAIN?

Farmers and other landowners will often be approached by developers seeking to obtain planning permission to build on the land. Great care is needed to avoid unnecessary tax charges on the transaction. HMRC have recently updated their guidance on transactions in land clarifying that under certain circumstances some of the eventual profit can be taxed as income not a capital gain. For individual property owners that could mean 45% income tax as opposed to just 28% CGT.

For example, a landowner sells some land to a developer for £5 million plus 10% of any profit on the development over £6 million. If the profit on the project was £8 million then the additional £200,000 would be taxed as a trading profit.

The tax rules in this area are complex. If you are involved in such a deal contact us so we can advise on the best way of structuring the transaction.

The other new allowance is a £1,000 deduction from gross income from property.  For example a couple might receive £700 in charges for parking on their drive in Wimbledon during the tennis tournament.

Joint owners of property could receive £1,000 tax free each, however you can’t claim the allowance on income from letting your own home under the Rent a Room Scheme. 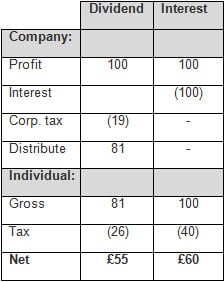